Mt. St. Helens erupted on May 18, 1980 and has since been closely monitored by the Cascade Volcano Observatory (CVO). It remains active and proximate to over a million people. I was the "volunteer photographer" for the CVO from 2012 through to 2014 where mostly I sorted and scanned slide film into digital format. But, I was offered a couple opportunities to accompany crews into the crater (via helicopter) to document their ongoing work.

This photo, captured in July 2012, shows Bryan, an intern, as he marked out the drop zone for the incoming sling loads. The day's project was to build a new data telemetry station to replace one that had been crushed by the previous winter's heavy snowfall. The steamy looking stuff is ... just that - steam. This location had multiple hot zones requiring care as to where one walked and worked. [I stupidly placed a camera backpack on a convenient rock only to see the nylon mesh begin to melt.]

A gallery of photos I captured for the CVO is posted at the following link: 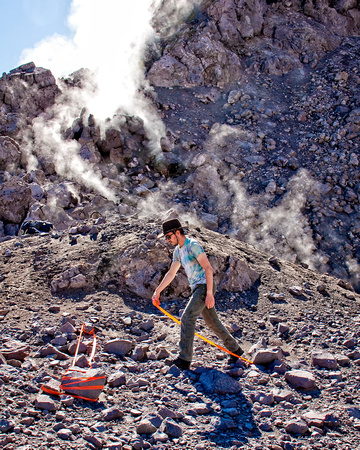