"Washington Mews is a private gated street in New York City between Fifth Avenue and University Place just north of Washington Square Park. Along with MacDougal Alley and Stuyvesant Street, it was originally part of a Lenape trail which connected the Hudson and East Rivers, and was first developed as a mews (row of stables) that serviced horses from homes in the area. Since the 1950s the former stables have served as housing, offices and other facilities for New York University."

The photo was captured during a visit to NYC where I attended a workshop on street photography. As a reflection of the street photography genre, the image was processed into a black and white photo ... with a couple exceptions (look for them). A separate gallery on the workshop has been posted at: 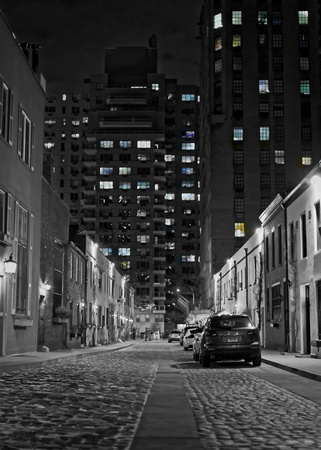